Monroe Tractor has become a full-service dealer for any make or model of construction and agriculture equipment, President Janet Felosky says. “We can repair and service all makes of equipment,” she says. “We were in the rental business … long before other people were.”

But when the local suburbs began pushing the agricultural operations more into rural areas, Hansen decided it was time to pursue construction and started a division to rehabilitate construction equipment. Today, the firm serves both markets, she says.

“[It is] a good form of diversification,” she says, noting that the agriculture sector is much more active today than construction. “It used to be the reverse. Now that housing is supposedly improving and if the government decides to support money for our infrastructure, we would again be [getting a] 50 percent contribution from both the construction and agriculture industries.”

Felosky joined Monroe Tractor in 1972. After four decades, she has enjoyed working at the firm, which is the only family owned business of its type locally. “Most of our competitors are owned by out-of-state ownership,” she says.

She adds that the company’s family environment has nurtured staff longevity. Among those who have “stayed the course” with her, Felosky says, is Frank Schoenacker, who is the general manager for the firm’s western operations. “[He has] been with me for 40 years,” she says.

The general manager for the firm’s eastern operations is Chuck Miller. “He oversees the Albany, Elmira and Binghamton, [N.Y.], offices,” she says.

Another key person is Sales Manager John Dancy. “He’s out there trying to help the salesmen complete equipment deals,” Felosky says, also praising Store Manager Josh Clark. He has maintained the department of transportation and organization of general services business from New York state as well as served the construction customer base.

Felosky’s son, Chris Felosky, also takes part in the firm by selling crushers to the mining industry. “He’s been [integral] in getting the right people in place to promote that product and service it well,” she says. “We have sold a number of crushers and screens after taking on the line three years ago.”

Monroe Tractor places a strong focus on its customers, which is reflected in its slogan, “We keep you working.” Felosky says the company recently pushed a marketing campaign over the last 18 months with that slogan and the release of its own brand book, explaining the company’s philosophy, which was created and promoted through its marketing manager, Laura Wilkas.

As part of its commitment, Monroe Tractor also fixes machines built by manufacturers that it does not represent. That flexibility has kept the firm’s shop busy and allowed it to enjoy repeat business, Felosky says.

“That’s what you have to count on today,” she says. “Our business is pretty limited. We sell and service less than 5 percent of the total population and with [the construction equipment] economy not growing in the last four years and many customers leaving the industry, we have to maintain our customer base through providing uptime service, parts and availability of a rental fleet.”

Monroe Tractor will continue searching for ways to expand, which will include looking at new product lines, Felosky says. “We’re just trying to get the next opportunity for growth,” she says, adding that she sees potential with the improvement in housing.

One market the company could potentially grow into is hydrofracking. This form of oil and natural gas extraction has created booms in such states as Pennsylvania and Ohio.

However, New York state hasn’t approved it yet. “They have a lot of politics to get through,” she says.

New York Gov. Andrew Cuomo recently announced that a decision on fracking will be delayed until sometime in 2013. However, Felosky believes that the issue will be resolved. “We have the right locations in the heart of the natural gas in New York state,” she says. 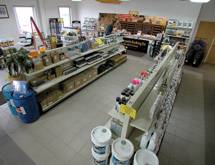 Last month, our Precision Product Specialist at Monroe Tractor Auburn, Nathan Wood, installed an AgLeader SteerCommand GPS system onto New York Farm Girls’ John Deere 7930. With this system, they will be able to take advantage of the benefits of automated steering. The operator can be more efficient with each pass using the full width […]

Monroe Tractor is proud to announce it has been named a 2020 Gold Dealer by Case Construction Equipment. This award recognizes Case’s top dealers in a variety of categories. In 2020, Monroe Tractor showed excellence in sales performance, marketing and communications, product support, parts support, and training. “One of the most important ways that CASE […]